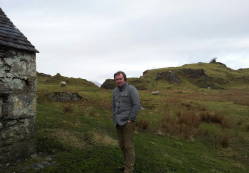 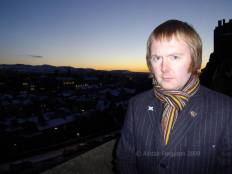 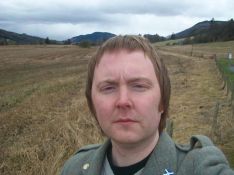 I am very much delighted to bring to you a wee interview with the most brilliant, Àdhamh Ó Broin.

You likely already know him as the Scottish Gaelic coach to the original Starz series Outlander cast and from the terrifically fun and not always simple to learn, “Speak Outlander” videos. I don’t know about you, the Scottish Gaelic bug has bitten me and I need more learning beyond these wonderful segments. 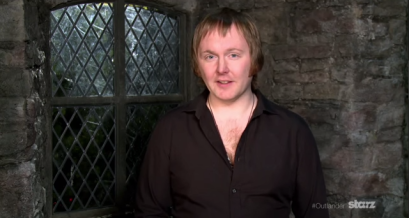 He is a multi-talented renaissance type. A musician, writer, fluent Scottish Gaelic learner on a mission to bring back in a large way, this beautiful, expressive language in his native Scotland. He just may be one of the hardest working (and playing) men around. For those wondering, yes, he is also a proud family man.

There is definitely more than meets the Scottish Gaelic tongue about Àdhamh!

A Dram of Àdhamh

How did you discover your penchant for music and languages? And at what age?

I began playing guitar at school aged 9, but wasn’t incredibly interested in it. Picked it up again aged 16 and have never put it down since. Mine was a music-less culture-less house. My parents had no interest in Scotland, Gaelic or history and my father thought of most music as “noise”. I suppose interest in all of these things came from within because I certainly wasn’t exposed to them!

However, I always enjoyed speaking to my father about the English language as he was very knowledgeable about etymology and would explain to me the Greek and Latin roots of words. We would sit by the fire in Argyll and look up words in the dictionary for the sake of conversation.

He also spoke colloquial German and used it with me in a limited fashion until I was about nine when he began making a real effort to speak it to me. We would grab an apple each and walk out into the forest to hear the dawn chorus at about 4am and speak nothing but German until we came home. I consider German a native language because of this, but I also have a great paranoia of speaking it amongst Germans because I have never been absolutely fluent and am ashamed when I make mistakes. I have no such fear in any other language. It’s quite odd!

(I imagine he can curse in German right alongside Lord John, Hal and William. His lack of exposure to Scots Gaelic or music is our gain. Seems to have built a deep fervency within him upon discovery.)

How many instruments do you play? Is there a favorite?

My voice is my favourite, followed in close second by guitar. I can also play bass guitar and most percussion pretty well and can get by on the drums. I can get a decent tune out of a banjo, mandolin, ukelele and sometimes manage not to make a fiddle sound too horrific. I can also pick out a tune on the tin whistle and chanter altho I have yet to master the breathing required for the Highland pipes!

(Versatile is he. Can be the entire band if needed.If you have not heard him sing and play, you must. He is quite gifted.)

How many languages do you speak fluently?

(I am exceedingly intrigued by Glaswegian Scots.Quite a colorful dialect.)

Favorite phrase in any language?

gasta (Scottish Gaelic) = “great” I say it all the time!

(This one surprised me at first, but then, his obvious zest for life brought it full circle for me.)

As you are a dad, do your children have any care or concept of your skill and popularity?

My eldest daughter Eilidh is about to turn 16 and so is caught up in her own life as we all were at that age. I think she reckons it’s pretty cool, but doesn’t give much away about anything right at the moment, so I can never really tell what she thinks!

My middle daughter Caoimhe is very attuned to the way I think and is the most fluent Gaelic speaker amongst my kids. She is a Gael to the bone and is extremely loyal to our culture and language. She can sing most of the old songs we know verse and chorus and tries to help her mum pick the language up! She doesn’t have a very clear conception of what I am doing as she’s only 7, but is chuffed to bits to know that it’s to do with Gaelic being in a big U.S. TV series!

My twins are proud speakers too and near enough completely fluent. Unfortunately I am away working so much of the time that they don’t get the exposure to the tongue that I would like as they naturally speak English when they’re around their mum, but when we finish up filming, I am looking forward greatly to spending more time with them. I don’t think they really have any idea of what’s going on with Outlander as they’re only 5 and just about to start school, but they’ll certainly remember this era in years to come, especially with the referendum coming up. They love to count the YES stickers in house and car windows!

(Yes he has four bairns and a lovely, smart wife. I do wonder how much Gaelic his wife has…..Can you imagine all the children and Àdhamh speaking rapid Scottish Gaelic… For information on #indyref – Scottish Independence Referendum – for the record I am an American who has done my own research and fully supports YES.)

A favorite moment you can share from your Outlander experience?

I will never forget standing in the great hall of Castle Leoch during the filming of episode 2 and hearing Sam and Gary dishing out the language. I could’ve died and gone to heaven, it was near perfect considering we’d come from nothing only a few short weeks earlier. I said jokingly to director John Dahl about the effort of my Gaelic learner babies: “I’m a proud father” and he said -being busy and not realising the joke: “wow, congratulations, what the heck are you doing here, get off set and get to the hospital!” – He thought my wife had given birth to another child!

(To be a fly on the wall during the filming of Episode 102. I would have died and gone to heaven with you Àdhamh. It makes me a bit giddy knowing how excited this scene made Àdhamh. I imagine being on the edge of my seat as a viewer.By the way, this is the first place you are reading about the John Dahl learner babies encounter. An exclusive quote! Thank you A.)

Thank you very much Àdhamh for taking the time to answer my queries and giving us a little sip of insight. I hope to share a real dram with you someday.

Want to know more about Àdhamh?

Àdhamh Ó Broin is a musician, writer and fluent Scottish Gaelic learner from Cowal in Argyll. He is the first person to raise a family of native speakers of his home dialect in 80 years and the first ever to resurrect a moribund Scottish dialect word for word to the status of a living language. He is founder of DROITSEACH, a project which seeks to revitalise interest in Scotland’s dialects and the former richness of the Gaelic language from where he was sourced to offer a Scottish Gaelic consultancy package to Sony Pictures’ OUTLANDER, currently filming in Cumbernauld, Scotland.

The photos are from the linked websites, pages.

3 thoughts on “A Dram of Àdhamh Ó Broin”