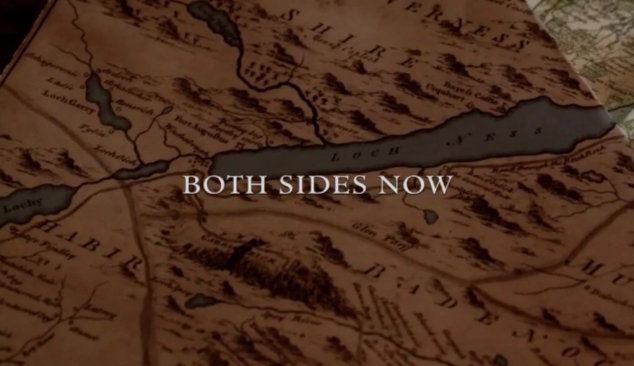 Three days gone Claire was being assaulted and interrogated by Black Jack Randall. Two days gone she was married to Jamie out of need.

We find her with Jamie, intimately holding hands and speaking face to face. He wants to know if it is the same for all couples like it is when they touch or lie together. She tries to say it is, then says no it is unusual, it is different than most. They have that “thing” fiery and bonded. She is getting lost in them, him, there. Happy they are. A moment of bliss. 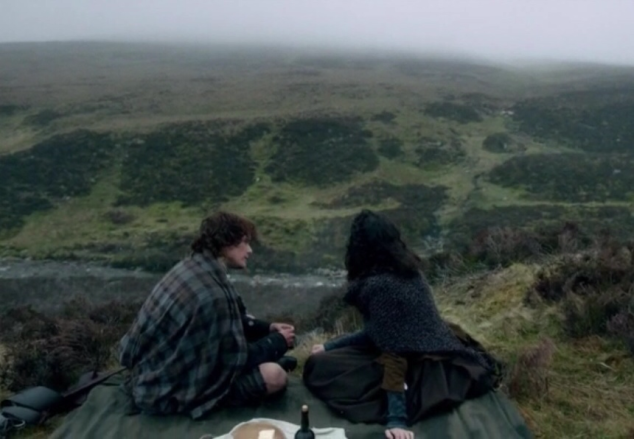 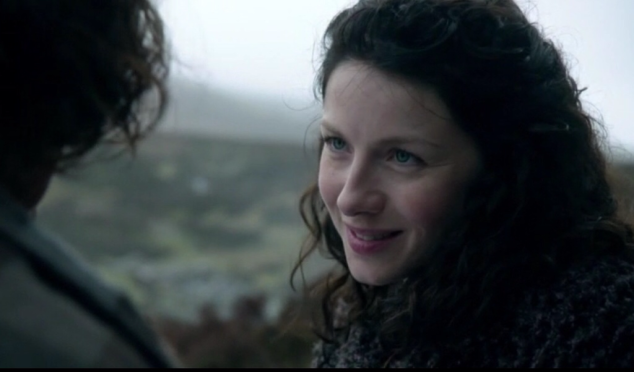 Hugh Munro a friend of Jamie’s shows up with a message for Jamie about a man who has evidence that he is not guilty of murder as charged. As a wedding gift he gives her a dragonfly in amber. I mention this because the foreshadowing is wonderful. She adores the gift. Jamie delights in the pending meeting. He hopes to take her home as his bride. Claire Fraser, Lady of Lallybroch. Joy and promises of future, belonging, peace are shared. 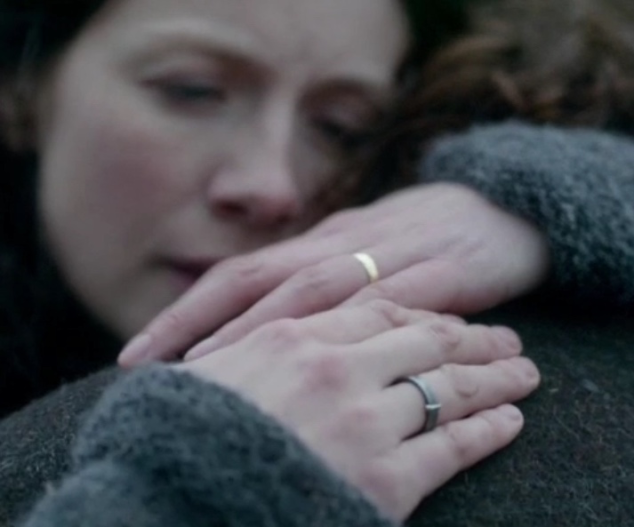 At camp that evening, Claire and Jamie are again sharing face to face intimacy while the others are listening to Rupert telling a water horse story by the fire. A sound, the men are at the silent ready, a kiss and knife hand off to Claire. A raid by the Grant’s. Sword fighting, and a shot fired by Ned. Jamie is worried about Claire. She is safe but dropped the knife. The men laugh after assessing the take by the raiders. All is well. Yet for Claire, is another taste of danger. This is life in 18th century highlands. It is not safe. 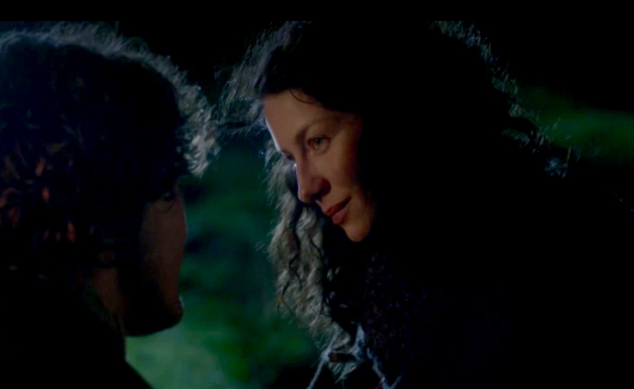 After the previous night’s mayhem, it is decided that Claire needs to learn self defense highland style. Angus teaches her how to use a sgian dubh, a small knife she can easily hide and wield. She is a good student. After her lessons, is feeling more prepared. Again a reflection of the time she is in. Knife skills are not something she needs in 1945. 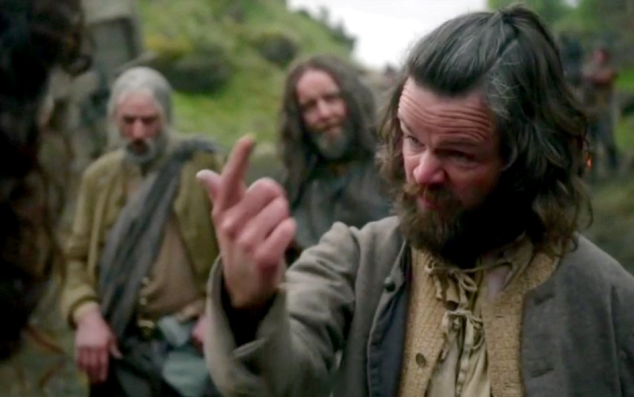 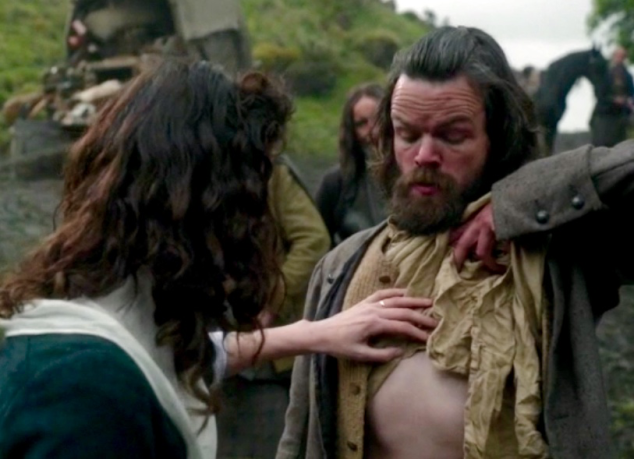 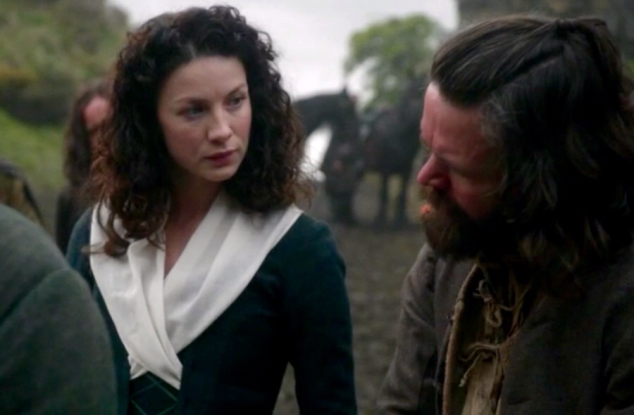 The next morning (day 4 since her meeting at the garrison), she and Jamie head out for an intimate rendezvous. Hot and heavy, they are enjoying each other when a gun clicks over Jamie’s head. Claire is forced to kill her would be rapist, while Jamie watches at gunpoint, unable to protect her. Her face, something shifts. She is deeply traumatized. Can she be safe here? 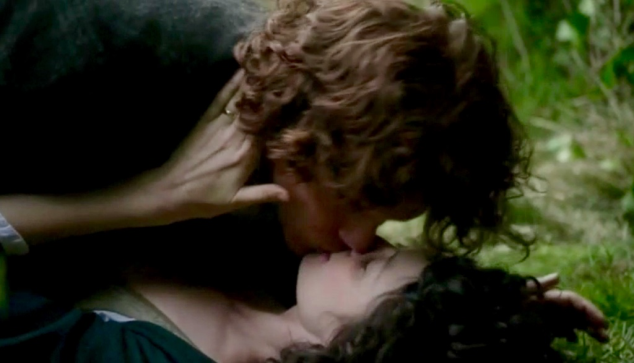 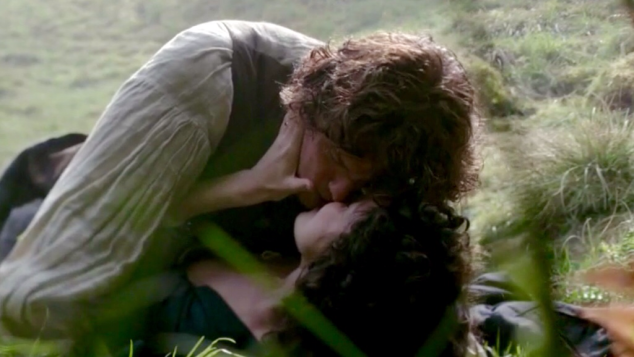 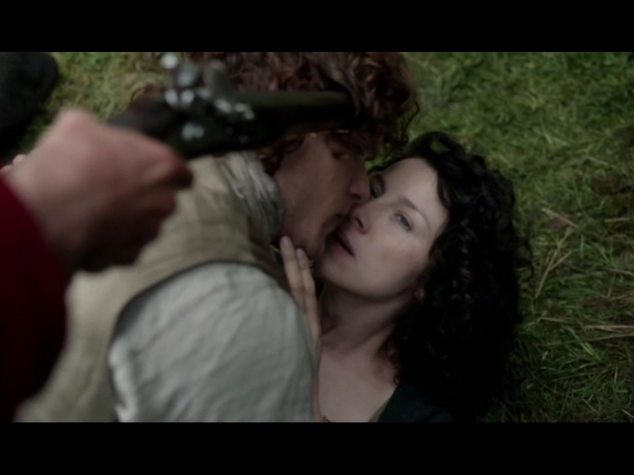 Think on this. In four days, BJR assaults her, she must marry, survives a night raid, and is nearly raped and has to kill a man.

Is there any doubt why she is in shock after this latest encounter? Jamie says it is his fault. She just shakes and mumbles. She cannot tell him what is within. Too much will pour forth.

I am not sure if it is the same day as the attacking by the deserters or the next, they are now riding to meet Horrocks. They travel very far she thinks. Then stopping, Jamie tells her she must stay behind. Redcoats are about. It is not safe for her to go with them. Willie is left behind to stay with her. Claire is angry. Angry that she forgot about her plan to get back to Frank. I think she is angry at Jamie for not protecting her. Angry she had to kill. Angry at nearly being raped. 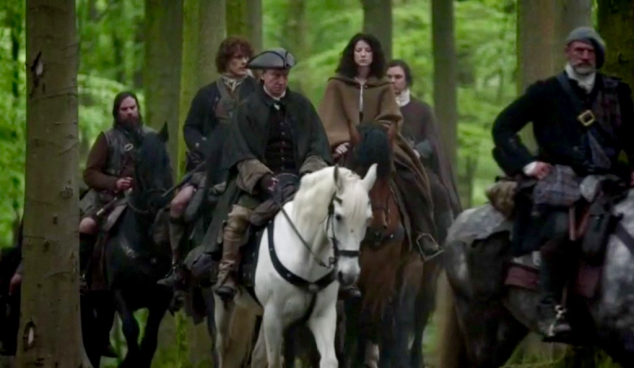 Well Willie must have some outdoor bathroom space, so Claire walks and wanders in the area. She is pacing through her mind the previous days. All the occurrences. Who she was. Who she is. Who she wants to be. And where. All of a sudden she looks ahead and Craigh na Dun is in her sight line. She looks back and makes a dash for it. She runs toward the stones. Toward Frank. I think she wants to find that safety. The known of Frank. The stability. 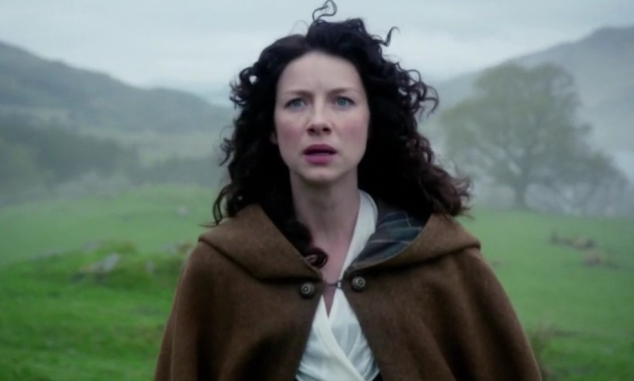 She thinks she hears Frank coming through the stones. She yells to him to wait for her.

Within reach she puts her hands toward the stones. 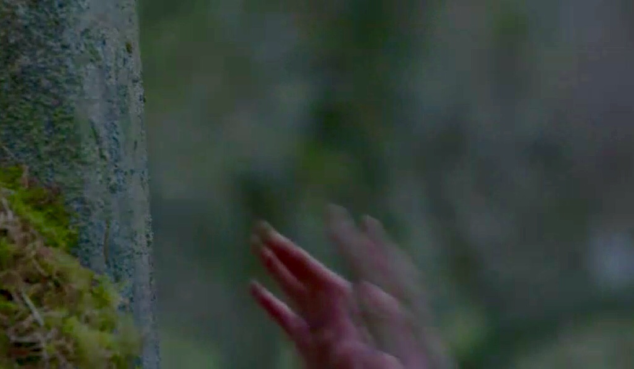 Before she can touch it. She is grabbed by redcoats. She screams and struggles. Is dragged away. 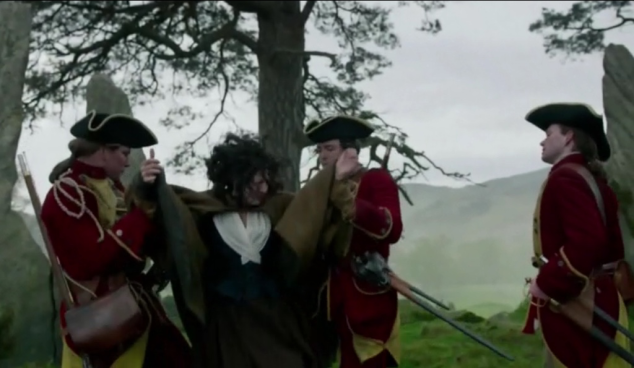 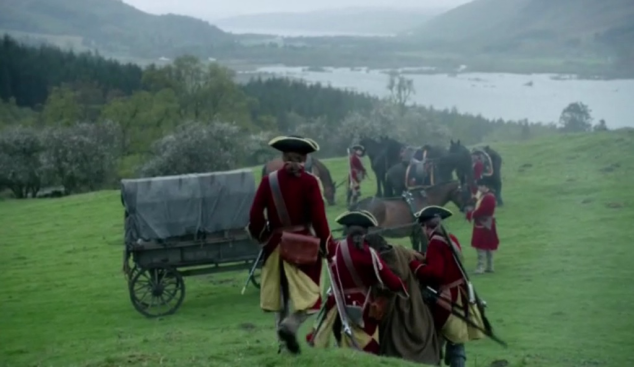 To Fort William they go. To Black Jack Randall. Four or five days since their last encounter. Oh Claire. So close.

Black Jack Randall. Claire. He is determined. She name drops his benefactor. For a moment has the upper hand. He traps her. He ties her up. Threatens serious harm to come if she does not talk. Cutting her bodice. Exposing her breasts. He turns her over the table, lifts her skirts as to rape her from behind. Finding her sgian dubh, threatens to cut off her left nipple. Claire is in serious trouble. She is in his grasp. More trauma added to the last few short days. More danger. 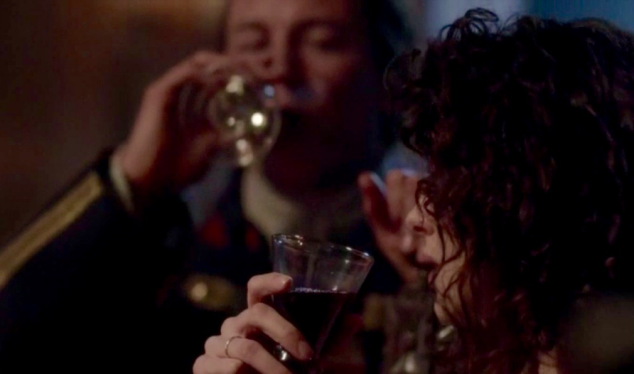 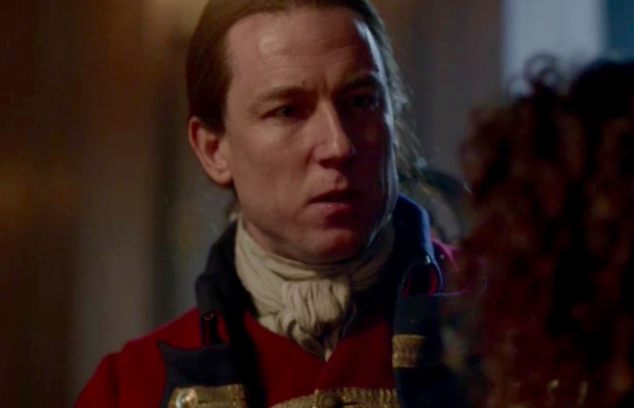 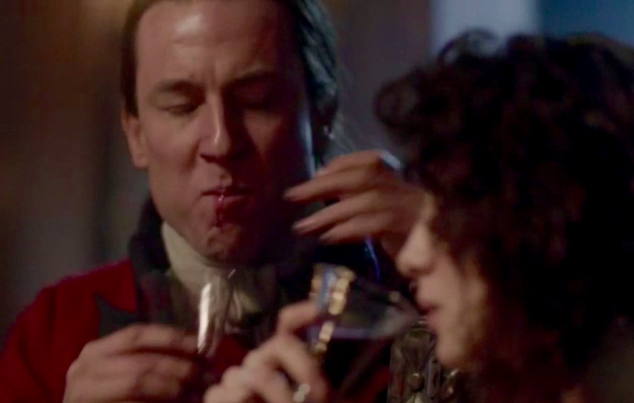 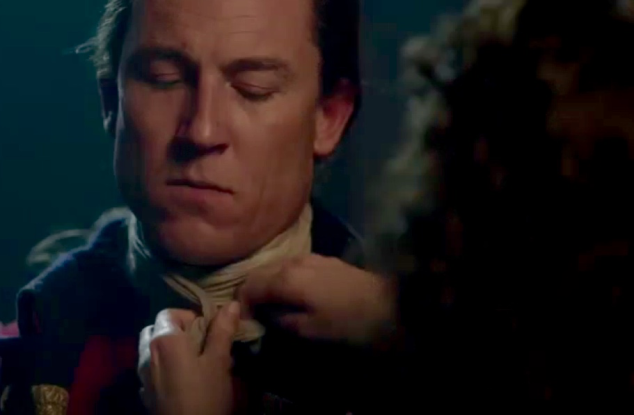 Helpless. The window flies open. Jamie is there to save her. Fade to black.

Is it any wonder Claire ran toward the stones, toward Frank regardless of her feelings for Jamie? Look at what she had gone through over days.

Would you have tried to go? Would you have simply stayed put? I get why she ran. Now add BJR. She has been through incredible stress and danger.