But He was Supposed to Die

Welcome to week 1 of the 26 part read-along podcast series of Voyager, the third (and most highly favored) book in the Outlander series, by Diana Gabaldon. Chapters 1-3 are included in this foundational episode, “But He was Supposed to Die”.

Jamie unhappily wakes to find himself not dead on Culloden Moor. Roger MacKenzie Wakefield believes he has found Jamie alive after the fated battle on Culloden Moor. Brianna is ready to learn more about her biological father after the shock and acknowledgement of Gillian Edgars going through the stones. And Claire…well she is understandably shocked, unbelieving it could be true after all this time thinking him dead, but, she agrees to more research into the possibility.

At the end of the read-along portion of the podcast, the weekly Outlander Science Club segment is waiting for listening and participation. OSC is brought to you by Karen Daugherty, the Sassenach Doctor, and me. The topics for #OutlanderSciClub are mid-20th century child rearing, breastfeeding practices, and Claire’s high-risk pregnancy designation upon return to the 1940’s. 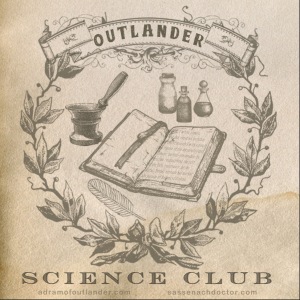 Where can you find the podcast? You may listen to the podcast directly above or The Sassenach Doctor within a post or through iTunes,Stitcher, and Google Play apps.

How can you interact? Follow the science prompts each week, research the topic, then share on ADOO or Sassenach Doctor’s social media or call in to the ADOO message line 719-425-9444. Comments or messages may be included in the podcast or a written post.  The hashtag to use is #OutlanderSciClub.