For all of season 4, I intend to leave the recaps to other bloggers and reviewers and to focus pretty narrowly on something in each episode that captures my attention: a character, a line or two of dialogue, a brief scene. Today I’m examining two tiny moments in episode 402 (“Do No Harm”) that I’m calling signature moves.

In the Outlander books, Diana Gabaldon has given Claire—and to a greater extent, Jamie—some mannerisms that occasionally reveal their state of mind. Claire’s aren’t as obvious as Jamie’s, probably because when Claire’s on the page, we’re usually in her 1st person point of view, and she’s simply not observing her own features at that point. But it’s obvious that her facial expressions are doing something to convey her emotions; more than once she is told that her countenance is readable to anyone who looks.

Jamie’s mannerisms—in the books—are more obvious: he shrugs his shoulders as if his shirt is too tight when he’s uncomfortable, he taps the fingers of his right hand when he’s nervous or antsy, he performs a very articulate Scottish noise.

These personal mannerisms aren’t quite as obvious in the Starz series, although both characters have a few gestures that they return to from episode to episode. Claire is a face cradler—there are many shots like the one below throughout the series, most of them when she’s comforting or reassuring Jamie (or during a moment of intimacy). 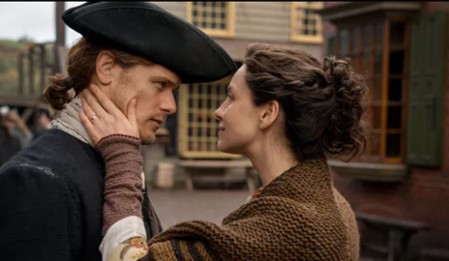 Jamie’s series gesture is similar to his book gesture—he’s a finger twitcher.

But episode 402 featured moments from both of our main characters that were bigger than mere gestures—signature moves that reveal something even deeper about their personalities.

Claire’s moment comes very near the end of the episode after she has given the injured slave Rufus a fatal dose of aconite to save him from a horrific death. She takes his hand and asks him to tell her about his sister—a moving act of compassion that immediately reminded me of a similar scene in season 1. In that scene, a man has been fatally gored by a wild boar, and she holds his hand and asks him about his home.

This reveals, I think, a side of Claire that we don’t see very often on the series. Television Claire is a total badass, unafraid to take on psychopathic redcoats, Highland chieftains, and murdering witches. We don’t often see her gentle side, but this tenderness toward the dying—this desire to assure that another’s death is both physically and emotionally painless—shows us that she is as fierce in compassion as she is in bravery.

Jamie’s moment comes a bit earlier in the episode when they are called to deal with the violence between Rufus and a cruel overseer. As Claire goes to help the injured slave, several of the white overseers close in on Jamie, ordering him to back off. He pulls two pistols from his belt, using their threat to hold off the incipient mob. This is very reminiscent of the season 1 scene in which he draws a sword and a dagger at Claire’s witch trial to hold off a similar crowd of angry men. 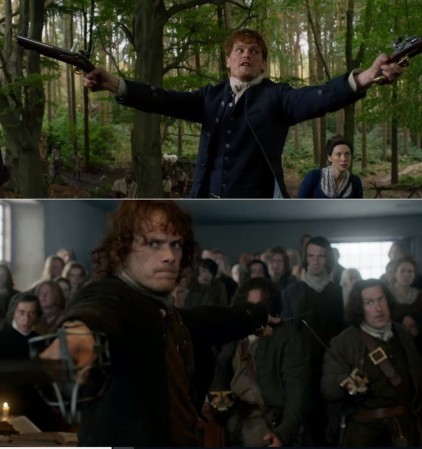 In both cases, Jamie is alone at Claire’s defense. If they’d tried, the others could eventually have overtaken him. Such is the force of his personality (and the ferociousness of this expression) that no one even tries.

I’ve read some criticism of Starz’ depiction of Jamie—some people think he’s too weak, too deferential, unrealistically progressive. But Jamie’s signature move shows us that the fearsome Highlander is alive and well and that he is as fierce in bravery as he is in compassion.

I appreciate the writers and producers for giving us the moments of connection from the books to the series and across seasons. These are firmly rooted in an understanding of Gabaldon’s books, and in these moments, we can sigh and think That’s the [Jamie, Claire] I’ve come to love, right here in my living room.

6 thoughts on “One is Compassionate; One is Fierce (hint: it’s both of them)”