I recently moderated an Outlander panel at the LI Who 3 Convention while visiting NYC.  My husband graciously agreed to go with me, even though we were on a trip for our 21st wedding anniversary. Turns out, his job was to video the proceedings for me to make a podcast and YouTube posting. I’m still working on the editing, it will be up soon.

Leading up to the panel, I was terrifically nervous, knowing I was going to not only meet Frazer Hines and Annette Badland, but I was going to moderate a near hour-long panel with them. Why the nerves? I had moderated panels in the past, as well as, been on panels, but for my work and advocacy.  Entertainment is a different animal. These two have been in the business for many years and have done countless interviews. I wanted them to have a good time in all of this as well.

I prepped by writing, what I estimated to be 42 minutes of questions for them to answer. I wanted to be sure there was time for audience Q and A.  It turned out to be a small audience, so I was thankful to have had a good amount of material to pull from.

My goal was to have a Claire cosplay outfit for the event, I was unable to make that happen, so I wore my beautiful, official Outlander tartan shawl, in the midst of some amazing Doctor Who inspired cosplay wear. I had many positive comments from Whovians about my tartan.  They understood the Outlander/Doctor Who convergence.

As soon as Annette and Frazer came in the room and sat at the table, it was obvious they didn’t know the panel was to be moderated. I greeted them both, putting them at ease that they wouldn’t be up there free-form for almost an hour.  And we were off and running. They were both incredibly kind, funny, and charming.

A few things they talked about…..Frazer kept trying to make a case that he (Sir Fletcher) and Mrs. Fitz should have a thing next season. Frazer, well he loves the tricorn hat and wants to come back as a redcoat. Annette disclosed that more of Ms. Fitz was written into Outlander Season 2, but because of her ongoing commitment to the other show she is on, she had to turn it down. She said the powers that be are trying to resolve it. Since the Outlander series is being shown on Amazon Prime in the UK, neither said they are recognized often for their characters at home, though fans from other countries recognize them. Neither took home any souvenirs from the set.  Annette adored working with all the boys on set. And yes, it was as cold as it looked like on TV. I will post the complete manuscript and hopefully the audio/video in the next few days.

The time flew by and in a blink the 50 minutes was up.  I am not going to lie, I was “fangirling” pretty hard on the inside. Then getting abundant hugs and cheek kisses from Annette, well, that put the cherry on top of my already delicious ice cream sundae. They both said they were surprised at how quickly the time went and thanked me for doing a good job.

Finally, my special thanks to the LI Who showrunner, Ken Deep and LI Who Press and Media maven, Andre Tessier, for inviting me to moderate the panel. It was my pleasure to be there.

Sadly, Annette Badland is not on social media, but Frazer Hines is on Twitter. I venture he’d like to here from you about his Sir Fletcher role and about being the inspiration for the much beloved Jamie Fraser.

For more background on the panel, see my previous post. 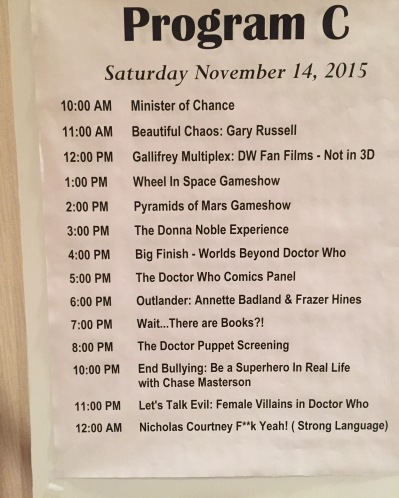 CALLING all Long Island and local area Sassenachs and Outlanders.

November 14, 2015, I will be hosting the Outlander panel at the Long Island’s Doctor Who Convention.

Why would Outlander be present at a Doctor Who convention? There is an intrinsic link between the two. A Doctor Who episode, inspired the location and timeline for the practice book, that became the ongoing Outlander book series by Diana Gabaldon and the now popular Starz television series. 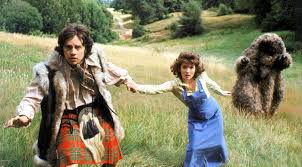 Frazer Hines, who portrayed the kilt wearing Jamie McCrimmon on the above mentioned Doctor Who episode, alongside Annette Badland, who currently plays Mrs. Fitzgibbons on the television show, will be on the panel.

Frazer also recently had a cameo appearance on Season 1 of the Starz television series, playing Sir Ian Fletcher, governor of Wentworth Prison, where Jamie Fraser was being held by Black Jack Randall. For her tie-in, Annette has appeared on Doctor Who, as Margaret Blaine.

I am quite excited about meeting these two and spending an hour in q and a with them. If you have a question you would like me to ask, please email me , tweet or Facebook me by Friday, 11/13. Please use hashtag #ADOOLIWho in tweets.

The panel is on Saturday 11/14 at 6pm, Program C. Tickets are still available for the Con. 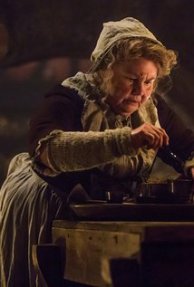 The panel will be recorded for the podcast and YouTube channel.